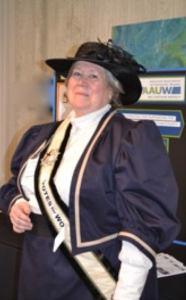 AAUW has been advocating for gender equity locally for over 100 years! Our official charter for the Bellingham chapter of what was then the Association of College Alumnae was submitted in September, 1918, by a group of local women who met at the Bellingham YWCA, the same place we meet now. Over the years, we became the American Association of University Women Bellingham. With the continued expansion of our programs and membership beyond the Bellingham city limits, we are about to become AAUW Whatcom.

We began by raising money for college scholarships, supporting women in STEM and providing educational programming for our members, as we do today. Our first scholarship recipient was a 1919 graduate of Whatcom High School, who used the funds to attend the University of Washington. In 1921, we began our support of women in STEM with a donation to Marie Curie to buy radium for her experiments. As our first 25 years were bracketed by World Wars I and II, it should come as no surprise that our programs focused on national and international issues.

In the late 1920s, the branch added a Child Study Group and, by the 1940s, we had 14 study groups and a project to collect books to rebuild Russia’s ruined libraries.

In the 50s, the Used Book Sale began, and our first Named Grant at Western Washington University was awarded with the proceeds. Since then, 113 Educational Foundation Named Grants have been awarded. The book sale continued for 48 years and became the main fundraiser for not only the AAUW endowment for Western’s Educational Foundation, but also for scholarships for women at Whatcom Community College and, more recently, Bellingham Technical College and Northwest Indian College.

In the 70s and 80s, members secured national AAUW Research and Project Endowment Grants. One funded the Bellingham Fish Book of recipes and information about our local fishing industry. A second grant was used for a hands-on education project about Northwest Coastal Native peoples. Supported by Whatcom County Museum of History, it was named “Kumtux Mamook,” and the workshop is still used in elementary schools throughout the county.

In 2002, the branch began the High School Scholars program to recognize the achievements of girls in Whatcom County who excel in STEM. The program is intended to motivate young women to advance their educations and consider careers in the disciplines of science, technology, engineering and math. In recent years, STEM has expanded to STEAM, recognizing achievements in arts and humanities, as well. Over 200 have been recognized to date.

Our branch has also been sponsoring rising eighth graders to week-long Tech Trek STEM camps since 2013. This year we plan to send 10 girls, which will bring our total to 44. The camps, on college campuses, are designed using national AAUW research to make STEM fields exciting and accessible to girls in middle school—the age when girls’ participation in these fields statistically drops. Activities speak to their curiosity, giving them opportunities to work with peers and women scientists and placing them on a path toward success.

AAUW Bellingham remains focused on the goals established a century ago, expanding the breadth and depth of our efforts. We’ve made it clear that our definitions include all those who identify as women and girls. We have made all our programs available both in Bellingham and throughout Whatcom County. We are recruiting more membership from beyond the city. And we hope that, through our growth, opportunities for women and girls continue to expand.